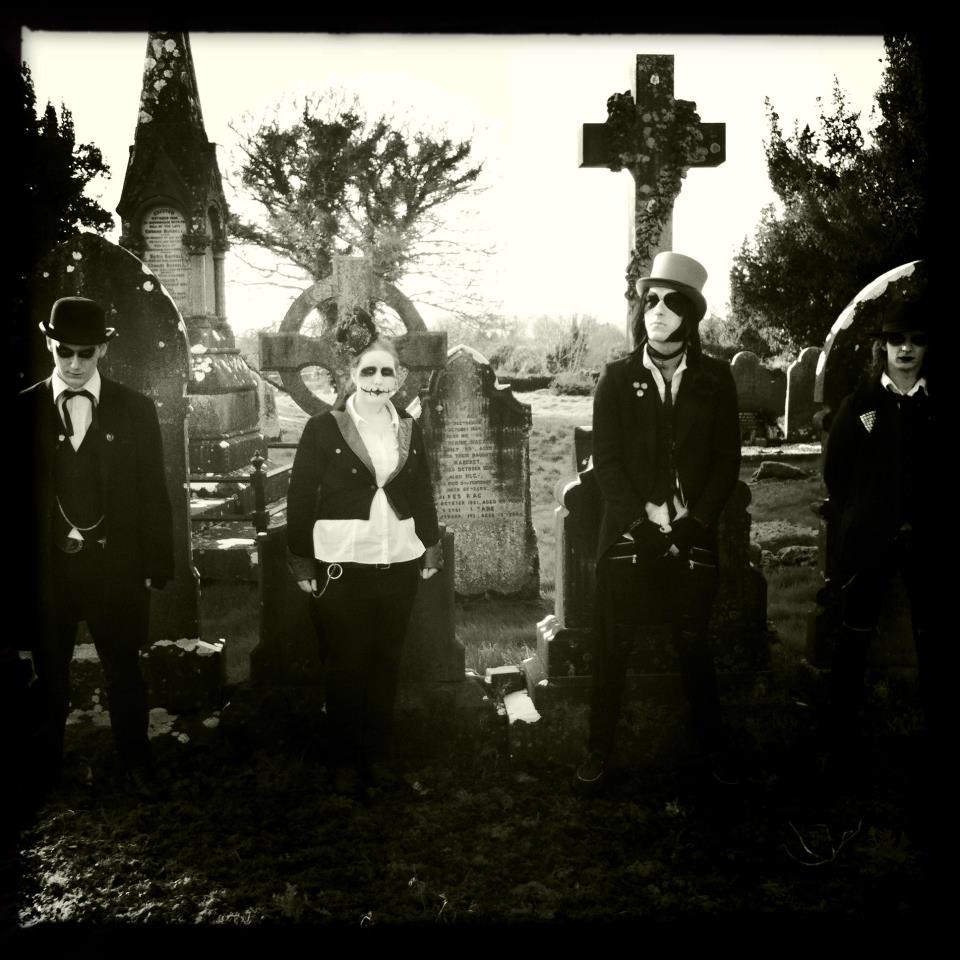 Cadaver Club features Dirge and Draggle, the brothers Filth, on guitar and drums respectively, the exotic Boom Chic Chic on bass and the mysterious Mr. Crowe on vocals. Their debut album, ‘A Fate Worse Than Life’, is released on October 31st so the band members were perfect victims for Uber Rock’s 13 Days of Halloween…..

1.) What are your most vivid childhood memories of Halloween?

For many people Christmas is the big family holiday, but for me Hallowe’en was always the highlight of the year. It was the one night I felt I could be myself unapologetically. Early memories are tied in with my sister where we cooked up spells and put hexes on the rest of the family. The smell of the bonfire, the taste of autumn and the crackle and the static of the dead air is fixed in my mind always. – Mr. Crowe

2.) Why do you think that the worlds of horror and metal/punk have always been so closely linked?

I suppose they are both created by and attract extreme personalities. It was inevitably that they would meet. – Draggle

3.) Has there been a horror remake yet that has bettered the original movie?

Not that I am aware of, the originals hold memories that you carry with you so when a remake comes along you don’t have the same emotional connection. – Mr. Crowe

Plus, you already know what is going to happen – Dirge

That iconic shower scene in ‘Psycho’ with Janet Leigh where she is murdered with the power of suggestion. The clever camera angles and jarring score help the audience fill in the blanks. – Boom Chic Chic 5.) Who is the baddest ever horror movie villain…and why?

It may not be conventional but, the Wicked Witch of the West. Every witch has been modelled on her since and she was the epitome of evil. There was no humanity in her what so ever, so she could not be reasoned with. – Mr. Crowe

6.) Who is the greatest ever Scream Queen?

Me, I love a slasher. So it would have to be Jamie Lee Curtis in the grand daddy of them all, Halloween. – Dirge

7.) Name your Top 5 favourite horror movies of all time…and tell us why!!

Well, we have had this discussion many times in the Club house and after much debate we have decided on the following, in no particular…

The Wolfman – This is one of the original universal horrors and has informed every werewolf movie since. – Mr. Crowe

8.) What underrated horror movie would you recommend to our readers just in case they have never seen it?

Willy Wonka. It is totally underrated as a horror movie… What ever happened to those children?? – Draggle

9.) What is your guilty pleasure, the trashy horror flick that you hold dear but everyone else runs away from?

Hatchet. Simply because they invented a petrol powered sander for an outdoor kill, so no one would ask where the power came from! – Draggle

10.) What is the greatest ever horror movie poster?

Boris Karloff’s ‘The Mummy’. It is a stunningly beautiful painting. – Boom Chic Chic

11.) Have you ever had a ghostly supernatural experience?

We have all had a few. First one that comes to mind is the story of the 3 monkeys. I had just moved in to a new house and was completely new to the area. I thought I would take the edge off with a few drinks upstairs in my room. I locked the door behind me, poured a glass and settled in for the night. The next morning when I woke, the room had been turned upside down but the door was still locked. I got up to access the situation only to discover a small wooden ornament on my dresser that I had never seen before. It was the three monkeys, ‘See no evil, hear no evil, speak no evil’. No one could have came in, but something was there… I still have the monkeys. – Draggle

12.) What ‘star’ of the music world would you like to see slaughtered in gory horror movie style?

Keith Richards. Because we would like to see them try! – Draggle

13.) What are your plans for Halloween this year?

This Hallowe’en sees the release of our debut album ‘A Fate Worse Than Life’. We will be celebrating the culmination of a very successful PledgeMusic campaign and reflecting on our achievements over this past year. We hope our record provides a new soundtrack to all the Hallowe’en lovers out there. We will also be preparing for our first tour of the UK which kicks off on the 8th November in Manchester.