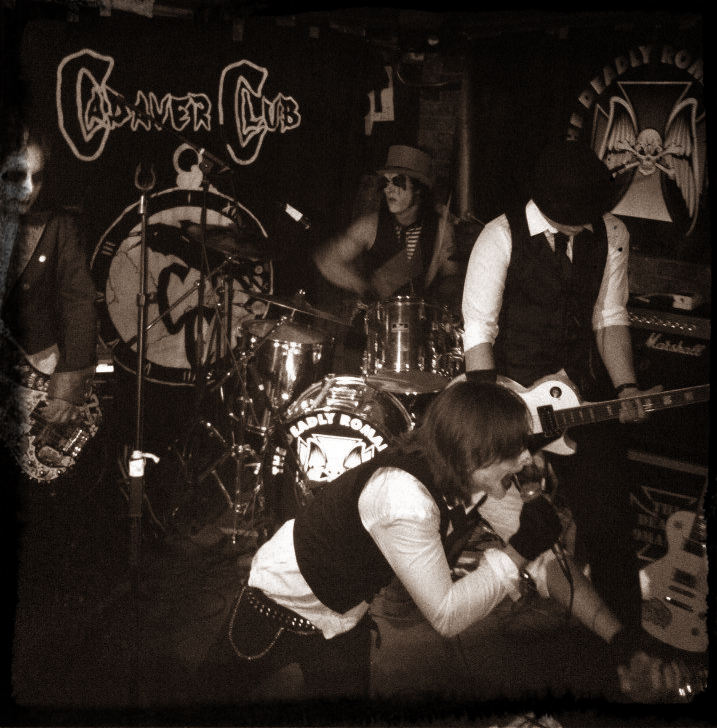 ‘Twas the night before the tour and all through the Clubhouse, not a creature was stirring…well, maybe a bat.

As our Irish dates happened more than a week before the UK leg of the tour, I’m going to concentrate on the English and Scottish dates as they are still fresh in my dusty old scarecrow head.

After celebrating my birthday (I’m now too old to remember my age) with my fellow Cadavers, we set about preparing for our gig in Manchester. Myself and Boom had not met The Deadly Romantics (our touring partners) before so we approached with caution, not quite knowing what to expect. What we were bombarded with was full on adrenaline fuelled rock n’roll turned up to 11. This was to be a very LOUD series of shows.

The big surprise of the night was seeing friends from home come walking down the street toward the venue. One had come all the way from Ireland that day to see us play!

Luckily we were ready to blow the cobwebs off, make some noise and gain a few souls for our collection. Draggle counted us in, 1-2-3-4 and we were off! I’m Making a Monster, Baby, Do You Dig Graves?, Dead Air all flew by before I could even catch my breath. Sally’s Curse was a highlight for me as we had some fun with the timing and changed things around a little. We play our songs by feel, not by numbers. Dirge had a few guitar strap problems but was aided and abetted by members of the audience and Brian from The Deadly Romantics. Brian would become some sort of a hero by the time the tour was over but we’ll get to all that later.

We met some of the fans who pledged for the album at the gig too which was nice. This would be a recurring feature of the tour, particularly in London but that’s day 2, nothing to concern ourselves with here.

Well an old Crowe’s voice won’t look after itself so I had to retire from the after-show party and give it some rest and lots of water, I would be needing it again. Back into the coffin I went and within minutes I was dead to the world.