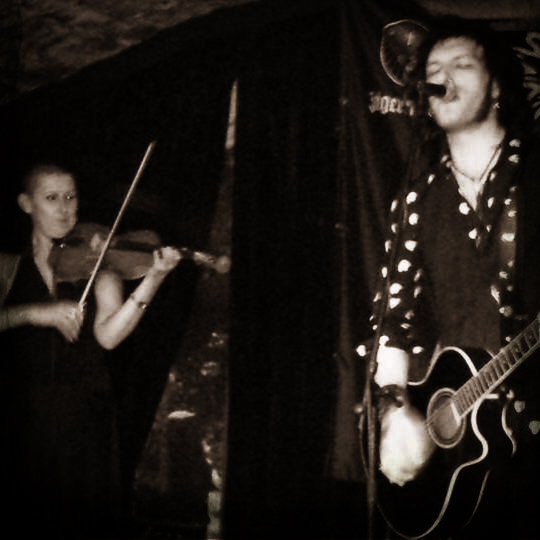 Tuesday was a lazy day for three quarters of Cadaver Club. We had no show tonight, instead it was Draggle’s alter-ego, Matty James’ turn to take the stage. Matty had a gig with John Carabi later in Bannermans, the same venue we played last night and some preparation to do. He had a few songs to rehearse with Mary Robbs, who was adding violin to them. I was looking forward to hearing what they came up with.

We all eventually got up and out. We went prowling for a while to see what we could find. One of the things we found was a skeleton of a T-Rex in the museum! So impressive. Boom and myself also took a trip underground to the Dungeons. It was a pleasant experience for us as we were told tales of Burke and Hare, Sawny Bean and the like. A nice little trip down memory lane, as we had known most of these good people personally.

As the gig approached, we all gathered back at Bannermans. Matty commanded the crowd with his usual authority and he was in fine voice. Halfway through the set he invited Mary to join him onstage and for the next three songs we were transfixed with the combination of guitar and violin. Absolutely bewitching. The haunting, sweeping melodies Mary added took the songs somewhere else and me with them. I love good music played well and most importantly, from the heart. This had heart and soul and you just knew they meant every note.

John Corabi, although jetlagged, put in a great performance too. He is a true story-telling troubadour with a voice that can fill an entire room. It was nice to get chatting to him after the gig and get some tips from him on how to protect your throat, or in his words, “Look after your pipes,” while on tour.

Final order of business for the night was to nip up the street to the chip shop and fill the reserves, it had been ages since we’d eaten. We sneaked back into the venue and ate off the pool table by the light of an emergency exit sign. I have no idea why we didn’t go up to the apartment, I guess we just weren’t ready to say goodnight to Edinburgh yet.

The new dawn would announce the final day of the tour – next stop, Glasgow.