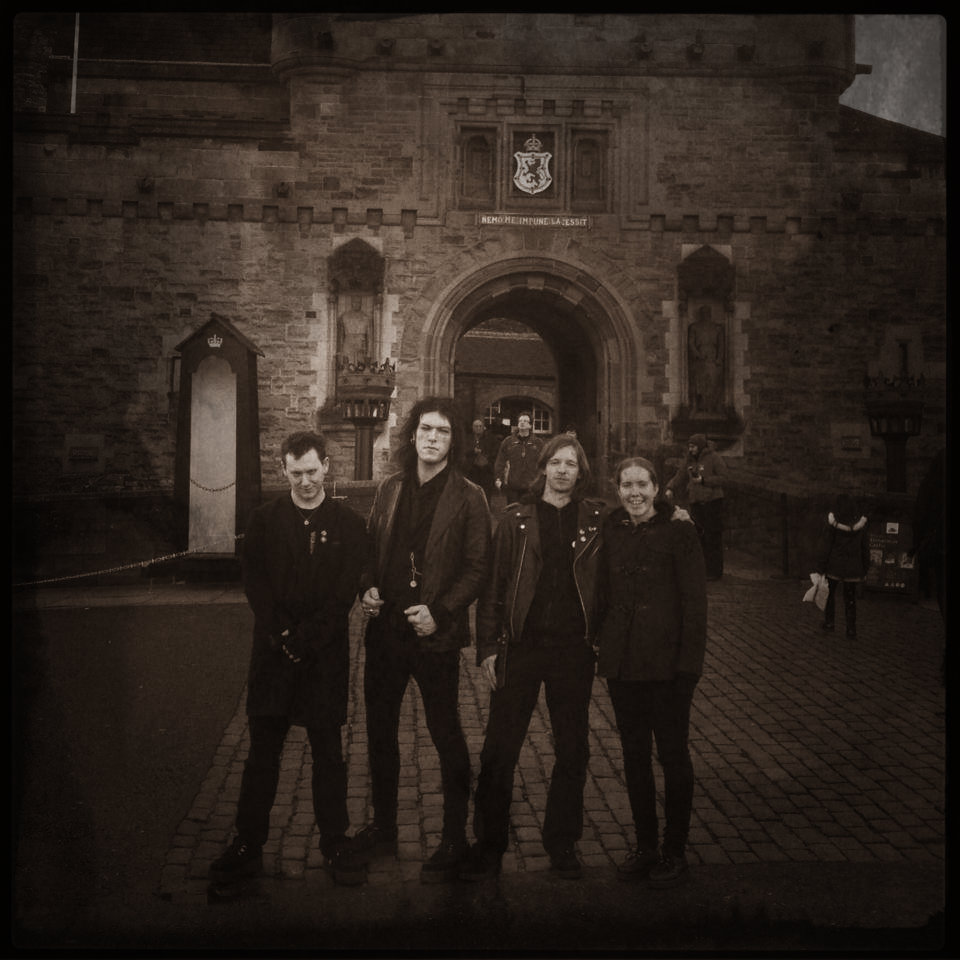 7.30…beep…get up…shower…in the dark. Ironic really, we’re a funeral band and we didn’t have a candle between us! Really must get that light fixed.

Monday morning, the middle of the working week for us. We got to the train station and began the beautiful trek to Edinburgh. The wear and tear was starting to show by now and we were good for nothing on the train, just sat half asleep admiring the scenery, glad of the warm carriage.

I’d never been to Edinburgh before but was looking forward to it and it was so much more than I’d hoped. All the twisty wee streets and steps straight out of a gothic novel. We made our way to Bannermans, were we would be playing tonight and met up with Christian, the promoter. What a guy. He brought us to the apartment upstairs which would serve as our Clubhouse for the next two days and fed us.

After a while, we headed out to get a look at the place. Did the usual touristy things like seeing the castle etc. I was taking note of all the things I fancied seeing on our day off, tomorrow.

Back at Bannermans, we met up with our tour buddies The Deadly Romantics once again. I think we got off light on the train, they had a seven hour van and car journey done by the time they got there. We set up the gear and got everything ready for the show.

Support band, Ugly Baby deserve a mention. Their shouty, punchy, quirky punk lit a fire in these old bones and got me ready for action.

This was the first night of the tour that we didn’t have a strict cut-off point. This meant we could play a bit longer without having to cut any songs. We had more time to talk as well so were far more relaxed, if you can call what we do relaxed! Some quote-worthy comments from the back as Draggle made ample use of his microphone to “address” the crowd, sending one poor woman home (or more likely to the bar) in a huff. Definitely the funniest night so far for us. The best thing was getting to air a new song, Southern Cemetery, in the encore because we had the luxury of time.

We got to meet more pledgers tonight too which was great.

It’s good to get people’s reactions to the album face to face, people that had put their faith in us right from the start and trusted us to produce a quality album. I know we said it time again on the nights we met the various pledgers but thank you all. The pledge campaign was meant to pay for the album, T-shirt and book but it ended up paying for the tour as well so it’s thanks to you all that we were able to come over and play without having to rob the poor box.

I headed off pretty early again to rest my voice. I accepted from the start this is what I had to do to be able to sing each night. It wouldn’t be very fair to my Cadaverous cohorts or to the audience if I stayed up all night talking and croaked my way through the next gig so off I went to my crypt once again. I’m glad I did take the sensible approach because the following night I would get vocal advice from John Corabi himself! That’s day 5 though and has no business being discussed here.

Until that morrow then my friends, may you rest in peace.