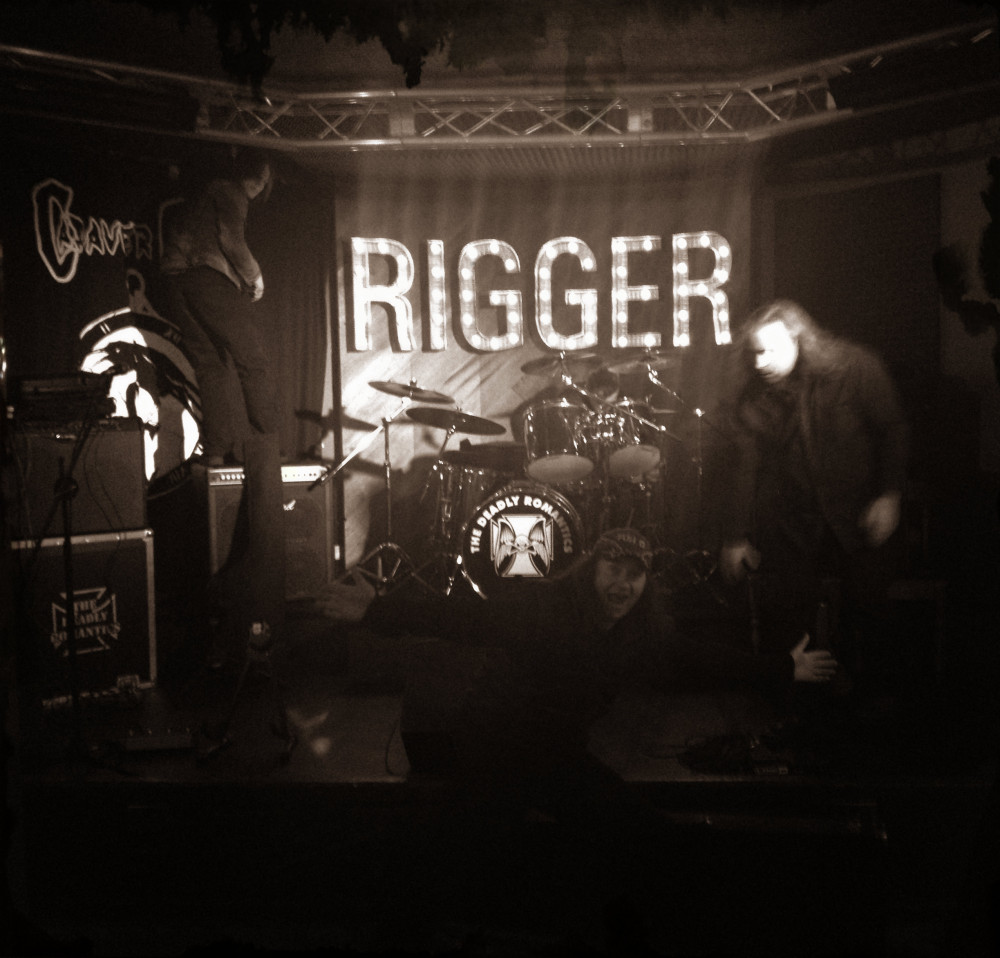 7.30…beep beep  beep…get up get up get up,  shower, emerge slowly and cautiously into the land of the living – not easy for an old corpse like me.

There was a little excursion to Camden planned for this morning with Mark and Brian from The Deadly Romantics. The van arrived and we stepped out to a clear blue sky, climbed into our seats and off we went. We prowled round the markets for a while, not really looking for anything in particular. Well I can’t speak for Ms. Chic Chic, she bought everything she passed! Tour rules declare that any food within reach is fair game so there we were, freezing our faces off, eating mixtures of Chinese food for breakfast. We know no fear! It’d be back to two slices of toast when we got home to Ireland.

Later we picked up the rest of the Romantics and headed off for Stoke, our next destination in line to be rocked. We had to make a little detour for Matty to pick up a guitar of Tyla’s (long story) but after that we were off up the highway to Hell once again.

There’s something we learned about service station food – it’s not cheap. Don’t do it kids.

Nine people in a van together on such a long journey sounds like a complete nightmare, considering some of us were only getting to know each other but it was actually brilliant, hilarious, interesting and life affirming. Friendships were forming as the miles passed.

The venue, The Rigger is a great spot. A real rock bar. Only thing is, we were now on Sunday night so this gig was a sedate enough affair for both bands. It was great for me because I got to meet Jason Burgess, a fellow my alter-ego Kev had painted a book cover for. Jason read extracts from the book before and between The Romantics and Cadaver Club. A brave man indeed, reading ghost stories at a rock gig but he did it with style and I applaud him.

Dirge found effects on the amp tonight that he had previously shied away from! Can’t remember which song it was but suddenly, from out of nowhere this huge wave of delay and looped guitars swamped the stage. He just looked up and gave us that cheeky yet slightly unhinged grin of his. What a beautiful noise. In fact, that is how I would describe the driving force behind this band – an irresistible urge to find that beautiful noise every night that only the four of us can make when we’re together. I love this. I lived for this. I died for it!

After the set, we were whisked off by that unstoppable Duracell bunny, Brian to the train station where we had a small margin of error to get the last train to Manchester. We had to get back to base to collect the rest of our clothes and stuff before going to Scotland as we would be eventually going home from there so briefly we parted ways with the Romantics but we would be seeing them again the next night in Edinburgh.

Time to wrap up warm…