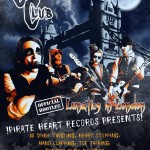 On Hallowe’en night 2013 Cadaver Club unleashed a monster they had been making in their basement for over a year; the fan-funded, critically acclaimed debut album ‘A Fate Worse Than Life’. Blood sweat and tears had gone into the making of their record; some of it even their own. Now that they had unveiled their creation, there was only one thing left to do; load up the hearse and take the monster on the road. And so, that following November the Club set out on the ‘A Fate Worse Than Live’ tour which saw them play their Funeral Punk across … END_OF_DOCUMENT_TOKEN_TO_BE_REPLACED