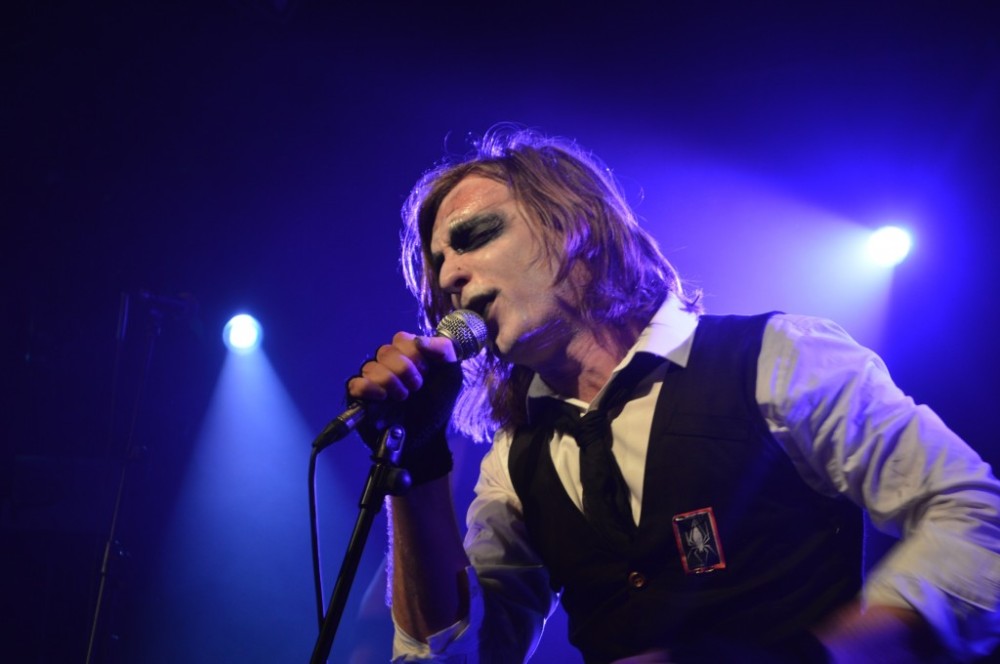 It’s a hot sweaty Saturday inside and outside the Limelight 2. It is Distortion night, punk rock is alive and well in Belfast. Arriving late… (blame Translink. And a faulty hairdryer) I caught the tail end of the second support act Eighty Four. Giving it loads in a Blink 182/Green Day mash up they were pleasing their entourage of fans no bounds. Will definitely hit them up again.

Next up was headliners Cadaver Club. Breaking all convention and scraping out of the darkness these guys and girl are set to take the music scene by storm with their unique style and punk rock sound, they are the self styled funeral band. Cadaver Club are Kevin McHugh – Mr Crowe on vocals, Jolene Phair – Boom Chic Chic on bass and Phil and Matty James Cassidy – Dirge and Draggle – The Brothers Filth (real life brothers and solo artists in their own right) on guitar and drums. All hailing from Fermanagh.

Clad head to toe in full black funereal garb and full face make up, Cadaver Club are different. They make no apologies in their distinct act and bring a refreshing sight to the punk rock scene which has long since been lacking originality. The dark, enigmatic energy is addictive, the stage presence is a full performance in itself.

The showmanship is second to none. Mr Crowe belts out each and every song with very little effort and you cannot take your eyes of the stage. They have their performance down to a tee, engaging with each riff and beat song after song. Taking to the stage with ‘I’m Making a Monster’ the crowd were on their feet. ‘Vampires Ain’t What They Used To Be’ is fantastic. A two finger saulte to the Twilight/Vampire Diary Hollywood conquering of the 21st Century horror characters. The band showcased two new songs – ‘Nine Sweet Angels’ and ‘Southern Cemetery,’ no doubt pleasing their legions of fans and making new ones on the way. Hell, there’s even a sea shanty in there wit Sally’s Curse. This was an impressive 14 song set . Not slacking for one second in their costume and stance – and it was HOT in there, each member takes to their character in full force. Closing on ‘The Warnings’ they bow out top hats and to a ‘See you in your dreams’ from the front man.